This is what I’d envisioned for our St. Patrick’s Day:

Thanks a lot, Pinterest, for filling my head with THESE gorgeous ideas. via: Stretching a Buck Blog, LushHome, whatdoiwear, momtastic, and Etsy

END_OF_DOCUMENT_TOKEN_TO_BE_REPLACED

Because our home has been utter chaos over the last week, I felt the need to assert some control over what I could. Ignited by that -AND- the need to do some spring cleaning, I tackled the rats’ nest that was my jewelry drawer. I didn’t want to spend any money, and use whatever I could find lying around, so I came up with this:

END_OF_DOCUMENT_TOKEN_TO_BE_REPLACED

The last few days have been really tough for me. Hubby overseas, my back went out, and the basement flooded with sewage.

Navigating that stress has been a challenge, since my best stress relief is exercise, which I CANNOT DO right now. SO. I may have lost my cool a little. Especially when the idiot insurance adjuster misread my contract and had me convinced for a few hours that the damage would not be covered. (Turns out, it was. Idiot.) Which brought me back to a trick I learned in high school.

END_OF_DOCUMENT_TOKEN_TO_BE_REPLACED

I’ve mentioned before that we moved into a 107 year old house last summer, right? Well, the family who lived there before did a renovation in the late 1990’s…and that’s where the house has stayed since. I’m hesitant to embark on any major updates since we’re planning to do some renovations and upgrades soon and I don’t want to make anything that will end up being ripped out in a couple of months, but there are a few things on the list that can become a project. Mostly because they irritate the hell out of me, but partly because they might end up being part of the new design. The biggest constraint is to keep the budget small…as in, miniscule. So this week’s project was a small one, but kind of fun because I got to whip out my paints and experiment….

Our kitchen is pretty dark and has one small window facing North. The roller shade on it fits well and does the job to give us privacy from the next door neighbors but it was NASTY. Decades of dirty dish water spray and kitchen gunk discolored it. Plus, it was  a country-cottage style that I’m not terribly fond of. So, I decided to touch it up. 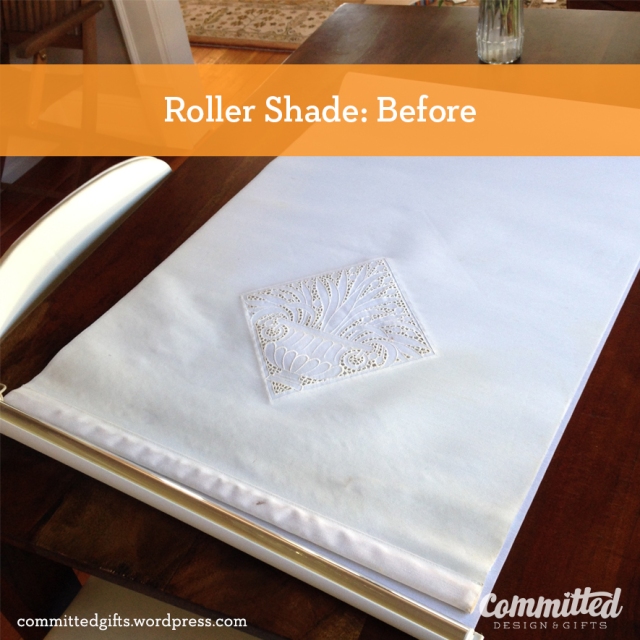 Years of grime and exposure yellowed the bottom half. There’s no explanation for the design, though.